Thanks to Mr. Wolf (you know who you are!), I am going to try a series of "fixes" to the hacking problem. The responses show up in my email, from AOL. but they are not on the site. Anyway, it will be rocky here for a bit--bear with me!
Posted by Meg Meg at 5:47 PM No comments:

Readers--someone who bills him or herself as "Anonymous" has seriously hacked this blog. I get 20-30 phony replies a day in my InBox, all offering me Viagra or a Russian bride. Plus some other stuff that was pretty offensive.

Any suggestions? Blogspot, the host of this site, has no way for me to get in touch with them--HELP!!
Posted by Meg Meg at 8:02 PM 1 comment:

Lincoln's Second Inaugural was brilliantly discussed by Walt Whitman, but his words seem sad, and not a little prophetic.

When I look at the photos of the Second Inaugural, I remember only too clearly who was not there--our Colonel. He had worked so hard to elect Lincoln. He rode the famous Inaugural Express to Washington, protecting Lincoln and the First Family as he went. He, Hay, and Nicolay sat together in the crowd at the Capital to hear Lincoln repeat the oath of office, and later that evening, they went as a trio of bachelors to the Inaugural Ball, held in a large tent erected especially for the occasion.

I know Elmer Ellsworth was missed. I missed him today.
Posted by Meg Meg at 6:54 PM 3 comments:

No image tonight, but excellent news:


The Kickstarter campaign for
SAVING LINCOLN
has already met its original goal, and more!

Thanks so much to everyone who donated. I will post more later, but check for yourself on the Kickstarter site.

NOT How the West Was Won 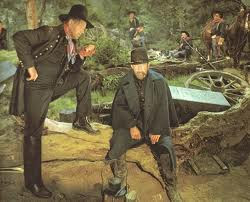 I watched an interesting movie last week--How The West Was Won. It had a bunch of stars from earlier decades, and the Civil War was included. This fact was why I watched it, btw. Oh my!

First, it was news to me that the West was won without the involvement of any African-Americans, or Africans either. There were smatterings of Germans (once) and a long shot including Asians, but I don't remember any Irish or AAs. Oh--there were a few Native Americans, but not too many. Who does these things?

The Civil War part was pretty funny. Harry Morgan (MASH?) was Grant, and at least his memorable voice did the character some justice. Sherman--yep, tall, thin, gangly Sherman--was played by John Wayne. Please help me! This was just so wrong, on so many levels. Sherman is prolly still laughing.

So--long story short--just because a movie has "some Civil War stuff in it," don't just trust that this will make it worth watching. Ever. Really.
Posted by Meg Meg at 9:36 PM 1 comment:

Help fund travel for this book--it's the right thing to do & it's tax deductible.